This is a controller review, my only one, but it’s a very interesting controller unlike any other.  I wrote this post early last year, originally, and it needs no real changes (other than fixing images, etc.).  This is a very cool controller I recommend!

I got a Performance Dual Impact Gamepad, aka “Dual Impact Gamepad Colors”, for the PS1 last year for $6. It’s a pretty interesting gamepad — for the most part it’s just a decent Dual Shock clone, larger and not quite as well made as the real thing but very comfortable to hold due to its size, but it’s got two unique features which make it a quite interesting controller to have. 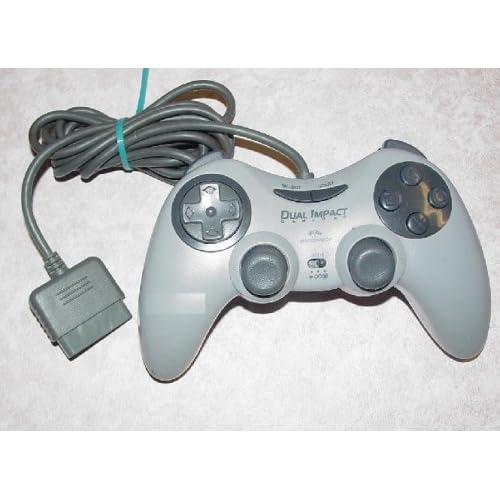 A Dual Impact Gamepad (not mine)

Mine looks like this, except it’s all grey, instead of being multicolored like that one. The key is that little switch in the lower middle. It’s got three settings. Left to right, they are Digital, Dual Analog, and Wheel (neGcon). This controller does have vibration feedback, and it works in any of the three modes in compatible games. (Note that there’s also Dual Impact 2, which is a PS2 controller, and does not have the neGcon mode. That looks like just your standard PS2 clone pad.)
As for this one though, its unique features are:

-First, there’s a neGcon (wheel) mode, so the controller’s left analog stick works with games that are neGcon but not Dual Analog compatible, such as Wipeout XL or Motor Toon Grand Prix. That’s awesome, it makes Wipeout XL almost feel like a new game! Worth it for that alone. Unfortunately it didn’t work correctly with Hardcore 4X4, which is a game that supposedly supports the neGcon/wheel, but that game plays great with the below mode, so there’s that at least. That’s probably the game’s fault, though, given that Wipeout XL, Motor Toon, etc. correctly recognize the pad as a wheel/neGcon.

One very interesting point here is that the Dual Impact’s neGcon mode IS Vibration compatible. That means that yes, you can play a racing game in neGcon mode on this pad, with rumble. Cool! 🙂 The neGcon and wheels like the Mad Catz wheel do not have vibration, but this does.

The only real negative about this mode is that the buttons aren’t labelled for the neGcon’s unique button labels, they’re only labelled as standard PS1 controller buttons, so you just have to memorize that in the wheel mode X is I, Square is II, Circle is A, Triangle is B, L1 or L2 are L, and R1 or R2 are R. It’s not too hard to remember though. I’m sure a real neGcon might be better than this, but those are extremely rare in the US, so I’d have to get it from EBay and pay a whole lot more than I did… and anyway, having an analog gamepad controller that supports neGcon/wheel mode is pretty cool! See the end of the post for a full list of how the game works in my neGcon-compatible games.
-Second, Dual Analog mode. It works as you expect, just like a Dual Shock pretty much. About the only negative versus a real Dual Shock, apart from the build quality/design changes, is that this has older-style small shoulder buttons, not the larger L2/R2 buttons the Dual Shock added. Too bad. Other than that though, works fine.
-And last (well, first, but I’m going backwards), Digital mode. While mostly this is as you’d think — decent (non-missing-center) d-pad and buttons — but interestingly, it’s got more than just that. The controller’s other unique function is that the analog sticks — yes, both of them — emulate the d-pad in digital controller mode. They aren’t analog of course, but still, it’s pretty interesting, and sometimes good, to be able to play dpad-only games with the stick… pretty unique feature, you see that on PC gamepads of course, but I’ve never seen it on any console gamepads… a few special console controllers can do that, such as the Sega Mission Stick for the Saturn and the Sega Sports Pad (trackball) for the Master System, but not gamepads… except for this one.

And yes, some games are more fun with the analog stick acting as a dpad than they are in digital mode. I’d ay that about Hardcore 4×4, for instance; the neGcon mode may be sadly broken, but in Digital mode with the stick, it plays quite nicely.
So, overall, yeah, it’s an interesting controller. I like it. And yes, even if it clearly doesn’t feel as well built as a first-party controller is, it’s not too fragile-feeling, and is comfortable to hold, more so than Sony controllers are for me — I find the Playstation controller too small. The only thing it doesn’t have is Dual Analog Joystick support — you know, the full-sized, twin-stick joystick for the PS1, (Yes, there are some games that only have analog with that; the Sony Dual Analog Gamepad has a mode supporting it, but no other gamepad I know of for the system does that.) — but apart from that it’s got everything else. In the end the Dual Impact is a good gamepad that I’m happy I got, mostly for Wipeout XL (It’s SO much better now! Sure I have the wheel, but that’s useless for this game.), but also for some other games too, and for the “analog stick usable in dpad-only games” thing too. Interesting stuff.

Dual Impact/neGcon Compatibility List
—
There are(definitely incomplete) lists of negCon compatible games here:
http://www.rolling-start.com/forum/viewtopic.php?f=14&t=26 and here
http://www.mobygames.com/attribute/sheet/attributeId,876/offset,0/so,0a/
Of those, I list below my results when using the games I have with this controller. Note: I mean US releases of the games, not other ones. Also I would only care about games with twist support, of course; if it’s just a “it uses the negcon but just the dpad”, it’s the same as it’d be with a regular controller.

Namco Museum Vol. 1 and Vol. 3 (in Pole Position and Pole Position II) – Works okay, though an actual wheel is better because of the much greater degree of motion — with the Dual Impact, make VERY small movements if you want to not crash.

Ridge Racer Turbo (on R4 Bonus Disc) – Unfortunately, the Dual Impact doesn’t work ingame with this game; the menus work, but it doesn’t recognize it once you start playing. To get analog here, you need to use either a real neGcon, or a wheel like the Mad Catz wheel (the game does not have Dual Shock support).

TNN Motorsports Hardcore 4×4 – While my Mad Catz wheel works fine, so the game does have neGcon support, it doesn’t work with this controller sadly — left and right both turn you in lefthand circles, you can’t go right.

Wipeout XL – Works perfectly, and is fantastic. This game doesn’t have Dual Shock support, so something analog for it is essential! And an actual wheel is far too wide a turning radius for something like Wipeout; that may be better for car-racing games like Pole Position or Destruction Derby, but in a Wipeout game, you really want a stick like this one.

I can’t find my copy of the original Wipeout, so I can’t test that one. 🙁

etc., I’m not going to test every single driving game I have right now, though I may add to this list in the future as I test more games.

I do know some which definitely don’t have neGcon support, though: Street Racer, JetMoto, and Dare Devil Derby 3D are digital-only for sure. Too bad. (JetMoto does have analog support in the PC version, but not on PS1.)

There are also some games that support the Dual Analog controller, but not the neGcon/wheel, such as JetMoto 2, Road Rash 3D, Driver, and plenty more.

This site uses Akismet to reduce spam. Learn how your comment data is processed.